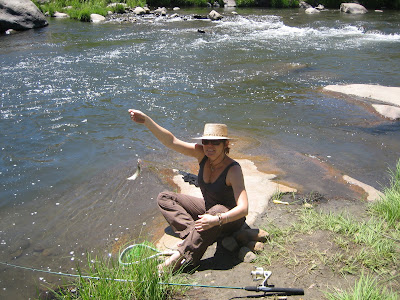 This 40licious is seriously considering becoming a vegetarian again.

I have received hundreds, if not thousands, of inquiries about where I’ve been from loyal 40licious.org readers. Thank you all for your concern!

I couldn’t tell you where I was going, however, because I was delightfully surprised by a camping trip to an undisclosed location. Which turned out to be one of the most beautiful places I’ve ever seen, the Kern River. Do you know this place?

We bombed out of the city Monday morning. The gritty landscape gave way to the relentless, impossible desert. We drove to soundtrack of 88 specially selected road tunes. We had enough food for a family of eight, for a week (there were only two of us). Except we forgot things like cutlery and plates and dish soap. And what a fool I was for thinking that we’d only need a six-pack of beer!

Our campsite was magical, with a couple little trails leading to our own little slice of shore on the Kern where we fished, took baths, chilled out. A canopy of green kept out the hot, hot sun. We ventured out a couple times for fishing and hiking — but it seemed better to just get “home,” to Site 17 at the Hospital Flat campground.

Now I haven’t been camping in years and years. Mostly because when I lived in the woods in Chimacum, off the grid, it was basically the camping experience with Internet access. But now that a few years have passed and I don’t expect a bear might take a crap on my coffee table, I can resoundingly yell from the treetops that I want more Big Nature in my life.

Here’s what I learned. Feel free to use any of these lessons, should you find yourself traipsing around the woods, sniffing your clothes to see which ones least smell like camp smoke, and swatting bugs for 72 hours straight:

1. Portion control: Really, there’s no reason for two full coolers of food, plus a giant box, for only two people. I think the rule is that you’re not supposed to eat more than your head’s worth every day. You don’t need all that variety. Instead of two or three cheese options, slice up a baggie full of some Monterey Jack and call it good.

2. S’mores are never as good as you remember them. If you must indulge, because it just wouldn’t be camping without, just make one and split it.

3. You can usually be Zen and let the bees do their thing and you do yours. Usually. but sometimes, a bee will get sick of you, all hanging around their living room, stinking up the place with your leftover carne asada, rice and egg breakfast, and sting your ass.

5. You can work the “I got stung by a bee!” sympathy for about 20 minutes, after which time, you have to go back to hauling your share of the stuff back to the truck.

5. You might take a lot of pictures and movies to help you remember your magic time out in the wilderness. Do not look at any of these during the trip. You will not like what you see. You will become obsessive over your puffy eyes and hair by God, and you will just keep trying to check out yourself in the car window. You cannot plug in your flat iron anywhere. Adding lip gloss will only make you look like a fool. Just go with it.

6. A shovel is the single most important tool you can bring camping. You can bat out fires with it and level your tent site. But most important, if you need to do what a bear does in the woods, it is much more elegant to excuse yourself to a remote, leafy location with said shovel and do it there, rather than to use the foul, stenchy, bee-ridden, holes they consider toilets at the campsite. Seriously, they have better bathrooms at Gitmo.

7. Your air mattress? It needs much more air than you think it does. Don’t attempt to blow it up yourself, either. About $9 in quarters at the gas-station air pump should do the trick.

8. Fish have their own angels and trout are smarter than people, for the most part, which is the way it should be. I actually rooted for the fish (my friend very masterfully snagged two decent sized ones for dinner. I threw my cute little catch back).

9. Around a campfire, silly songs become meaningful and serious songs turn hilarious. Conversations become sacred as you pull out the old forgotten stories and heartaches. Whiskey doesn’t get you drunk, just warmer and more insightful. Also, fireside lighting is quite flattering and makes up for all the puffiness and dinginess you accumulated during the day.

10. Upon arrival home, as soon as you drain the last ice chest and throw out the last waterlogged lump that used to be cheese or salami or sausage or chocolate, do not answer emails or phone calls. Do not read your mail or decide on the tile for your kitchen remodel. Instead, make haste to the nail salon for a full mani-pedi. The ladies who work there will roll their eyes at the condition of your hands and feet, and perhaps laugh and point, albeit politely. But you will have taken the all-important first step of returning to civilization. Which, sadly, is the reality. 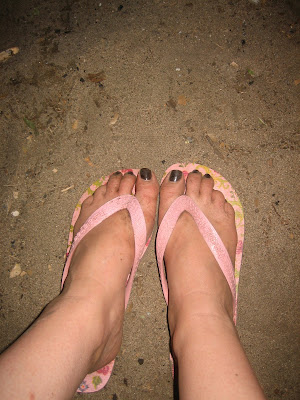 You simply cannot go back to work with feet like this.