The Celts have a word for this time of year: Samhain. It’s a time when you go indoors, work on crafty things, ponder existence, and listen to Led Zepelin and Etta James. My inner Celt is apparently raging, as I have made no less than five scarves in the last month. Mostly because I don’t know how to make hats or socks or anything else. However, I Speak Film turned me on to a great idea to knit kitchen towels out of cotton. (She is a GREAT photographer, but also a kick-ass knitter. She taught me!) Also, today, I made a handbag from a cute skirt that just didn’t look good on — and doesn’t look that good as a handbag, either, but it’s at least useful. Clearly, I am no Knitting Architect, and I will never be. 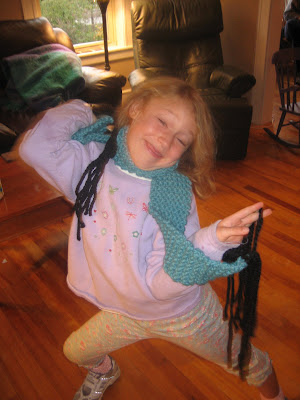 Little Mary wanted a scarf the same color as her towel.
She has a very bright future as a scarf model, don’t you think? 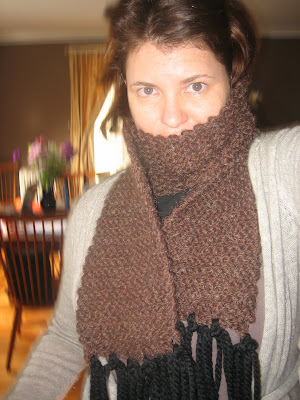 Brother Ian picked out his yarn for his scarf last April.
But it wouldn’t be as good if he didn’t have to wait.
This scarf has inspired envy in at least one person, and his order is in!

Now I need to get back to working on the things that really matter. The things that I want the most, what they call “blue chips.” Which involve me actually working.