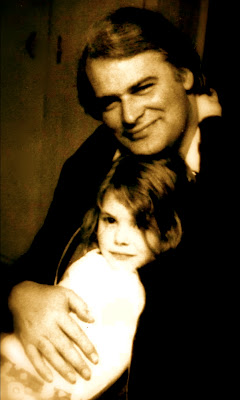 Five years ago today, my dad slipped out from his big, broken-down body. I am not sure where he went. Though I have a feeling he was still in the room with me, somewhere, palpably, for at least a couple hours after he was declared no longer of this earth. I don’t dream about him frequently, but when I do, we are always eating dinner and having a lovely time. I think that’s his way of checking in.

If he were around, he would have seen the terrible play I wrote about girls and their dads in 2005. He would have said goodbye — and “It’s about time” — as I left the Northwest for Los Angeles to seek a bigger universe. He would have fielded tearful calls as my threepeat with Marc imploded, yet again. He would come visit my new home, which reminds me so much of our New York apartment, the place where I grew up. Most of all, I hope he would have been proud of the person I have become, am becoming, will be.

Dad, if you are in a place where you can read this, know that I miss you terribly and that I love you dearly.