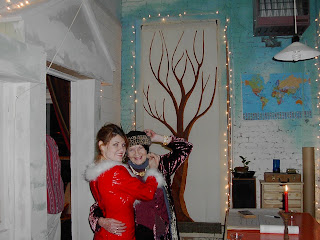 This month marks six years since my dad left this world. I miss his bear hug and the accompanying smell of his signature Paco Rabanne cologne.  I miss flopping down on the soft leather couch in his office and thumbing through magazines, as I waited for him to get off the phone so I could tell him something huge or insignificant. I especially miss him this time of year.

My dad was good at a lot of things, and terrible at a lot, like anyone. But he was at his best at Christmas. His history with the holiday, to be sure, was fraught with trouble. As kids on Christmas, he and my uncles Mike and Seamus would have to brave the absence (or worse, the mean drunkenness) of their barrel-chested father, a former Marine. Uncle Mike stopped celebrating Christmas when, at about 10, he was sent by his mother to go and recover Grandpa Pat and his suitcase from the bus station. But maybe those lousy holidays supercharged my dad.

As far as I can remember, Dad went all out. I have a fuzzy recollection from the very early ’70s of being at my godmother’s house, with all the grownups talking about the reindeer on the roof, which they would not let me see. And then being scared and suspicious as Santa came through the door … with my dad nowhere to be found.  Each year, there was a tree and presents for us — some years were better than others, depending on the ups and downs of his freelance writer’s career. But the most amazing thing about my dad, despite the fact that the rest of the year he gambled away the equivalent of my college tuition and that he exercised no self-restraint for early e-mail scammers offering Viagra and get-rich-quick schemes, is that he made sure EVERYONE had a present. It didn’t matter if you were the guy who came to fix the computer … shaving cream warmer. Cousin of the friend of the wife who came for dinner on Christmas Eve … Nordic-themed mittens. UPS man who had a flat and needed to make a call in the house … light-up picture frame.

See, Dad would buy a bunch of generic gifts and then quickly excuse himself to wrap them when someone came in the door, and write their name in his Catholic school cursive with a black fountain pen on the tag. And then he’d hand it over modestly, as if giving a personal gift to an almost perfect stranger were the most natural thing in the world.

As much as we can all agree that Christmas is not about presents, it is the way that he took such joy and responsibility in making sure everyone was covered that makes him a saint during this season. This year, I am making it a point to scoop up electric tie organizers and bath salts and kitchen mitts … because you never know who will show up.