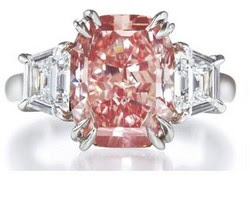 My girlfriend Alison has been obsessed with weddings since she was a little girl. For me, it was notsomuch marriages, I think, but the ceremony and all that surrounds the jumping-off point of a union. Alison recently opened her business as a wedding photographer, and it’s clear that she still holds tremendous passion for her work. She’s made the fairy tale into something else more real and meaningful to her.

On New Year’s Eve, after a raucous party at my house that involved fun neighbors, riverdancing and rum balls, Stevie and I decided aloud as we drifted off to sleep, that we want to be together. For a very very long time. No proposal, mind you. Just lots of conversations about logistics, proposals, rings, money, adoption, families — none of which are simple in our situation. With each of those difficult reality checks the fairy tale in my head disappears a little bit more. See, here’s what I was thinking:

1. Somehow, telepathically, Steve receives the picture of the $30,000 pink diamond ring I would want on my finger and goes out to find one like it, or have one made, with some money that magically appears.
2. I have completely put the idea of marriage or a proposal out of my mind, and instead concentrate on my new blog, and sewing, and learning to use my new camera.
3. I am so completely absorbed in my creative work and so happy with the way things are, that I am BLOWN AWAY by his surprise proposal which is in a sublimely beautiful spot, probably Seal Beach, where we had our first date. Some strangers happen to witness the proposal. They also happen to be Greek and run a restaurant. They are so overcome with joy for us that they usher us in and we dance and break plates together until it is late and we are all tired and a little drunk off all the Ouzo and Retsina (which, miraculously, does not make me throw up), and we are in such a perfect state of happiness that I think that if I were to die in 10 minutes, it would be OK because I have reached the apex of happy.
4. Steve, my big sparkly pink diamond ring, Lubelle the Dog and I find a GREAT house on the beach for $800. It’s tight but cozy, and we have room for the child we’re adopting.
5. As soon as we’re settled and the colors have been chosen, we get a call from the Agency. A birth mother wants to meet us! We go and it’s great, and look, there’s a baby who, miraculously, looks EXACTLY like us.
6. Me, Steve, the baby who looks EXACTLY like us, Lubelle the Dog and my big sparkly pink diamond ring live happily ever after. And his other kids come around and we all hang out and do crafts and cook dinner together. And I am so peaceful and happy that I create a succession of projects that make us rich, rich, rich. And Apple licenses a song from Steve’s band from 20 years ago that’s featured in a commercial, and it goes viral, and they go on a reunion tour and become huge hit, and he’s doing music instead of putting time in where we work.

But I know that won’t happen. Because that’s why they are called fairy tales. I think we aim as close as we can get, and then must set ourselves up to be surprised and delighted by what we get. Which, more often than not, is your own unique version of truth that far surpasses anything anyone else could have written for you.

Vanessa McGradyYou Have to Be Married in Order to Get Married01.31.2010