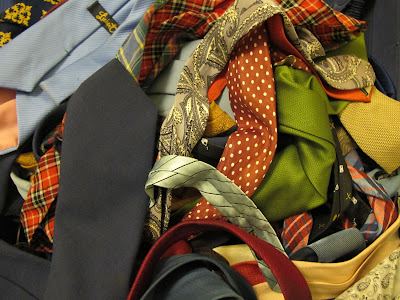 My friends recently had to move their 90-year-old relative into a home. A new home, with people who can help him live right. Not the one he’d been in with his mother for many years until she died, and then alone for the next few decades until he could no longer manage.

This man, whom I’d never met and likely never will, was a saver. I know this because I went up to help clean out the house. He saved paystubs from the 1950s — he’d worked as a mortician for 60 years, and each one of his pay stubs was placed neatly in a shoebox. He saved tiny parts to model planes and cars and boats that he’d assembled over the years. A museum’s worth of electric shavers, still in their boxes with instructions. Sewing machines from the 1920s through the 1960s. He even kept dozens of identical white shirts and countless pairs of navy slacks. Every tie he’d ever owned, in every width that had gone in and out of style.

He’d never had a girlfriend or boyfriend. But I could tell what he loved by going through the house: the clocks he built, all which keep different time and bong without reason, on the :12 or the :37 or what have you; his 1950’s mint condition Roadmaster and the 1983 El Camino that he ultimately drove into the garage wall, which signaled the end of his driving days; his mother’s china, free of chips and cracks and stains (I later learned that he’d subsisted for 25 years on TV dinners after his mother had died). He loved his family, too. All their letters, Christmas and birthday cards, pictures and postcards, were bound and in boxes high in the closet.

All this digging, sorting, folding and chucking I’ve done over the past 48 hours makes me wonder about my personal archaeology now that I am 40licious. The diaries that date back to second grade will only confuse and alarm readers, as they were usually written in times of great upheaval. I don’t know what I hope to leave behind. Hopefully a couple good ideas.