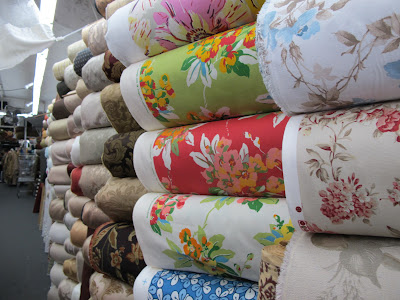 I’ve carved out Sundays for my own. Most people know that I’m not up for plans (unless, perhaps, they’ve come from out of town or if it’s a VERY special occasion). Not even the boyfriend gets time on Sundays, and that’s saying a lot.

The routine goes like this, generally: wake up, flip through the paper, hit the farmer’s market, ThriftScore, yoga, and then back home to do some kind of creative thing, like freelance or sew or make jewelry or try and make some kind of sense of my desk. Or paint. Or rearrange furnture. You get the picture. Sunday’s always a solo day, with the major conversations happening in my head.

Today, though, I realized that I was surrounded by like-minded kindred souls. Two of my favorite girlfriends were at yoga. And I went fabric shopping for hours in the fashion district, pawing through hundreds of bolts of home decorating material, with a friend from work who is the only guy I know besides my Dad who can rock a sewing machine.

All the people I was with were on their own path. But the paths joined and we walked them together for a while. Kind of like being alone, with company, which was nice.