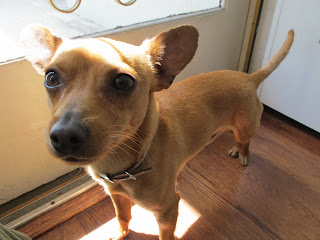 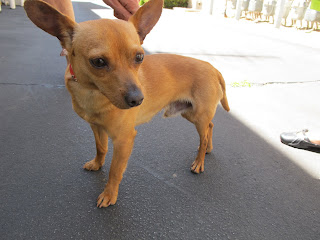 My neighbor found this puppy on the highway. Not around it, or on an exit ramp or something, but ON THE INTERSTATE 5 freeway. She is a dog angel, and because he is the last on a long list of rescues, she can’t keep him. Right before she was going to let him go to the pound, we stepped in.

There’s just something about those big brown eyes and huge floppy ears. He wore a red collar with a bell but no tag. Well fed, happy and loving … he must be somebody’s dog, we thought.

So we hit up Fido Finder and Craigslist. No response. The vet’s office says he isn’t microchipped. And why would he have a collar on with a bell but no tag? I’m becoming more convinced he was dumped on the side of the road.

All yesterday afternoon, we kept assuring each other that we wouldn’t keep him. Even though his puppy antics kept us laughing for hours. He delights the neighborhood children and stared down a big pit bull in Petco. He needs house training. He has fleas. He has no name, except the temporary one we’ve given him to tide us all over until he finds his family — Cinco.

We’re working pretty hard to find him a new home, and getting him all spruced up. Today was a new collar and leash and a dose of Front Line. Tomorrow it’s the vet for neutering and shots.

We want him to have the best possible start on his new little life. Somewhere else he can curl up like a baby on a lap and give tiny kisses. Somewhere else he can be happy and tangle himself up in a blanket. Somewhere he can sleep soundly with the oddest little puppy smile on his face. Because it would be crazy to take on a dog with a wedding and impeding adoption of a child and a move. 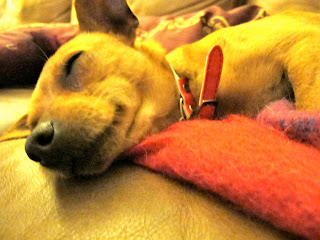