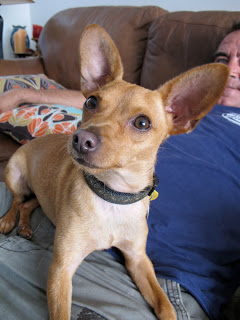 For the past three days, the small, sweet dog who is the fourth member of our household has been curled up in a ball, in his crate. He’s been given the comfiest pillow, and the choicest of bland foods (scrambled eggs, cottage cheese, chicken broth, plain white rice). He won’t eat. He won’t drink.

He’s also been signaling with bile and blood that there is something terribly, terribly wrong with him. We had a Saturday late-night visit to the emergency vet (the second in three months — the first was for Dog #1) and had hoped that something would pass, that it was a rawhide that went in the wrong way, or an “indiscretion,” as they call it, with some kind of food. But maybe it’s worse. Maybe it was a nail or something poisonous. We were kind of amused with the things that would turn up in his crate — candles, bras, plants, matches, batteries, screws, pages of books. Now that seems totally horrifying.

Even curling up in bed with us — his holy grail — is of no comfort. He just wants the crate.

So Steve has taken him to the second vet for the serious look. The X-ray. The deeper dive. They are there now.

I remember reading an old Dear Abby about a woman who spent her marriage complaining about her husband’s terrible snoring. When he died, she would have given anything to have him snoring next to her again.

Today, I wish that Cinco would jump up and down and squeal with delight when we come in the door. That he would be stealing and ripping apart my underwear. That he’d take a mischievous pee in front of the door right after we’d brought him back from a walk. That he would wriggle around in the down comforter with us on the couch, watching a movie, until he settles down and breathe slow sighs of peaceful sleep on my chest, his cold little nose buried in my armpit.

I want my little hell-raiser back.