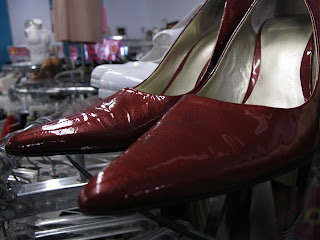 A new poll in the April 2011 edition of ShopSmart magazine, from the publisher of Consumer Reports, found that:

“Shoes never make your butt look big, you don’t have to worry about squeezing into them if you’ve put on a couple of pounds, and they can instantly make you feel sexier. Maybe that’s why, despite the economy, we’re still buying shoes,” said Lisa Lee Freeman, editor-in-chief of ShopSmart. “So we’ve compiled a guide to share the hottest trends, the most addictive shoe-shopping websites, how to pick a pair that won’t kill your feet, and an investigation into the difference between a $30 and $575 pair of shoes.”

ShopSmart’s Tips on Finding a Great Fit and Avoid Shoes That Look and Feel Cheap
HEEL CUP This is the curved back of the shoe that contains and supports your heel. It should fit snugly enough to provide support and prevent slipping while walking, yet not be so tight or stiff that it causes discomfort, which can lead to blisters.
STRAPS A strappy sandal or pump provides extra breathability. Straps and laces also let you adjust shoes to fit your foot. Just make sure they don’t rub. Elastic is better than rigid straps, as long as it doesn’t cut into your foot. T-straps support the front of the foot.
PADDING AND ARCH SUPPORT Press down with your fingers inside the shoe: The more springiness, the better they’ll feel. Some brands incorporate extra cushioning at key pressure points (Cole Haan with Nike Air technology, Hush Puppies, Kenneth Cole’s Gentle Souls line). A shoe’s arch should match the location of your own.
THE HEEL If you like a heel, aim for one that’s between a half-inch and 2½ or 3 inches max. Anything higher can cause foot and back pain. The wider the heel, the more stable the shoe: A platform or stacked heel trumps a stiletto. The heel should be positioned under the center of your own heel, not set too far back. And of course, a closed heel adds stability to a shoe or sandal.
DEGREE OF INCLINE A gradual ascent puts less pressure on the ball of the foot.
THE SOLE You want some firmness and note that a softsoled ballet flat is no better than a slipper. Rubber or leather beats flimsy plastic.
ORNAMENTATION If the shoe has buckles or other decorative trimmings, make sure they’re not attached where your foot bends, like across your toes, or they might be killers.
TOP STITCHING Shoes with tiny chain stitches around the top can’t be stretched, and the leather is less pliable. Exposed stitches inside shoes can rub and irritate toes. So can linings that peel back, so look for a full lining, top and bottom, heel to toe. Calfskin is more breathable than cheaper pigskin (which can be identified by small, visible pores).
THE UPPER Go natural. Suede is the softest, foot-friendliest material, followed by breathable leather. Fabrics are fine if they’re not stiff. Patent and mirrored leathers have coatings that make them less pliable, and synthetics are the least forgiving.

THE TOE BOX Round or almond shape toe boxes mirror the foot’s shape and have room for toes to spread out. There should be enough room for your toes to move as you walk, yet not so much that your foot slides around in the toe box. Pointy shoes aren’t necessarily bad; make sure the exaggerated tip starts half an inch after the base of your toes.