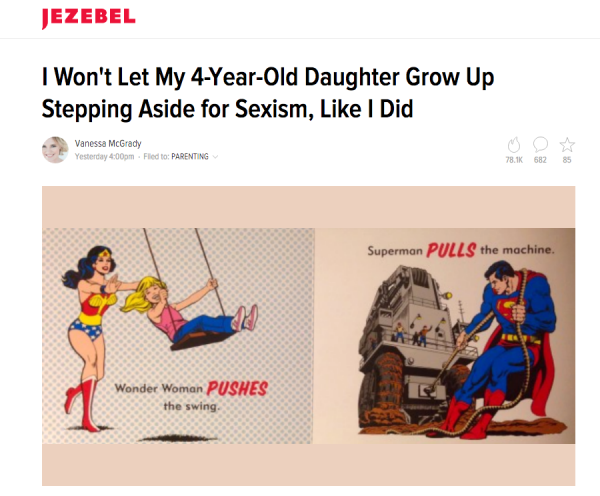 Microbullshit Stops Here, And It Stops Now: A Story of MicroFeminism In Five Parts

“A tsunami may be less than a foot (30 centimeters) in height on the surface of the open ocean, which is why they are not noticed by sailors. But the powerful shock wave of energy travels rapidly through the ocean as fast as a commercial jet.” – National Geographic News

I wrote a piece in Jezebel that’s gone viral about the tiny sexist particles I’m calling “microbullshit” that add up to a major cultural norm, and how I’m trying to create a different experience of girlhood for my daughter than I had. I’ve gotten more love than I expected for it, plenty of weirdness, and of course, the haters (I was harshly accused of being vegan and gluten-free by someone in the comments. Um.) In one part of the story I called to disappear a book from the library that showed Wonder Woman pushing a child in a swing, while all the other heroes were moving buildings and saving cities. The thing I should have made more clear in this is: I made my first half of my career defending the First Amendment when I worked for a controversial publishing house. In no way do I condone massive book burnings or the squelching of ideas. Rather, I’d was hoping the librarian I mentioned would consider this particular book as she would an outdated history book, say, that had incorrect information about science, slavery, civil rights, women’s rights, etc. Not burn it out of rage, but set it aside to make room for more current reality.